The Differences Between PEX-A, -B and -C 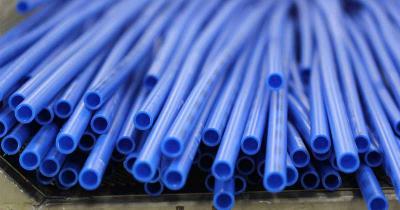 Developed in 1968 in Europe, PEX pipe came to the U.S. in the mid ‘80s, and for the past 15 years, it has become one of the most common materials used in residential plumbing systems.

When you see PEX-A, PEX-B and PEX-C, you may wonder what the differences are between them and which one you should choose. Below, we break down why there are three kinds of PEX, which traits they share and how they’re different.

How PEX Pipes are Similar

As many of you know, PEX stands for cross-linked polyethylene. The letter that follows simply signifies the type of manufacturing method used to cross link the polyethylene, not the grade of PEX.

If you look in the international plumbing codes, you’ll only see references to PEX, not the different types. That’s because by and large, all PEX pipes are very similar.

They must all meet the same performance standards. There are some requirements that apply to all PEX pipe used for commercial and residential plumbing applications. Others apply to PEX used in specific systems or applications. A few examples include:

They’re dimensionally the same. PEX size doesn’t change between PEX-A, -B and –C, as defined in ASTM F876. They’re all Copper Tube Size, or CTS.

They all have a Material Designation Code. All PEX pipe is assigned one of these codes based on their level of chlorine resistance, UV resistance and hydrostatic design basis (HDB), or pressure rating.

So What are the Differences between PEX types?

The truth is, not a whole lot. Again, the main distinction lies in the manufacturing method, which is what assigns an A, B or C to PEX.

There may be small variations in density, burst pressure levels and bend radiuses between PEX pipe types, but they’re negligible. There are, however, a couple of key differences to pay attention to no matter which PEX pipe you’re looking at.

The first digit is chlorine resistance. The highest rating is a Class 5.

Not all fitting systems are approved for use with PEX. To find out which fittings will work best with the tubing brand you choose, check the pipe. Tubing is marked with the standard designations for the fitting systems approved for use with the tubing. All SharkBite PEX tubing, for example, is marked with ASSE 1061, which is the standard for push-to-connect fittings.

There's no hard-and-fast rule for which PEX pipe — A, B or C — you should use. Given all the similarities and easily identifiable differences, your selection will be based more on your relationship and experience with a particular PEX tubing, your budget and the pipe’s availability in your area.

You can find our USA-made PEX-B pipe at wholesalers, on Amazon, at many home improvement retailers or at your local hardware store.

For more information on SharkBite PEX pipe, check out our detailed catalog.

Large Diameter SharkBite Fittings: When and How to Use Them

What are SharkBite large diameter brass push-to-connect fittings and what problems do they solve? Find out here.
Image

And what other RWC solutions integrate with SharkBite solutions for professional, reliable commercial plumbing installations.
Image