The Sustainability of PEX vs. Copper 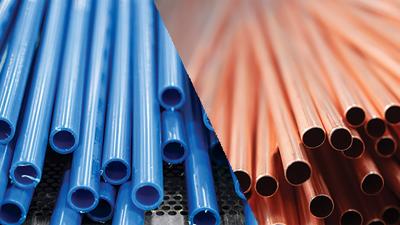 Though copper and other plastic pipes have been around for decades, PEX — cross-linked polyethylene — has offered a more reliable plumbing solution in the U.S. for over 35 years. Today, as the world focuses more on sustainable building practices, there’s growing emphasis on reducing the long-term impact of building materials, including pipes.

Sustainability is defined as meeting present needs without preventing future generations from meeting theirs, and it considers the balance of three pillars: environmental, economic and social impact.

Environmental Impact of PEX vs. Copper

PEX has a lower environmental impact than copper overall. PEX used with brass emits less greenhouse gases than all kinds of copper, according to a life cycle inventory report for the Plastic Piping Education Foundation. Below are a few factors that contribute to the environmental impact of each pipe:

To extract copper and make new copper pipes, miners strip mine to get copper ore. As they perform this process, they also remove finite natural resources from the Earth. The waste produced during the copper mining process makes up the largest percentage of metal mining and processing wastes in the U.S.

Polyethylene, on the other hand, is a byproduct of oil or natural gas that’s already being extracted for other energy use. So PEX doesn’t require the extraction of natural resources just to make the tubing.

The manufacturing process for plastic pipes has a low impact on the environment, and it doesn’t take a lot of energy to create PEX in particular. Copper has greater global warming potential since it requires a large amount of process energy — or burning of large amounts of fossil fuels to produce the pipe —according to the LCI report.

Process energy makes up 97% of the total energy for copper pipe systems. For polyethylene, it’s 26%.

Copper wastes at least 15% more energy than plastic pipes on average, the LCI report stated. Because copper is a conductor, water traveling in the pipes loses heat on its way to the spout or showerhead. But polyethylene is a non-conductor and has insulation properties, which means PEX plumbing systems require less energy than copper systems to achieve a desired water temperature.

When it takes longer to heat water, not only is electricity wasted but water volume too. Copper pipes waste about 32% more water than plastic pipes, according to the LCI report.

Copper is known for being recyclable. Scraps can easily be remelted and re-used for new piping. PEX can’t be melted for reuse once it is cross-linked, but it can be repurposed. At the end of its life, PEX tubing can be ground up and used as a filler in composite lumber, playground equipment, traffic barriers and more.

The Economic Impact of PEX vs. Copper

The economic pillar focuses on achieving a level of profitability that will support a business long term without compromising environmental or social sustainability. A few things can affect the economic sustainability of piping systems.

PEX pipe costs significantly less than copper pipe. For example, 1/2-inch SharkBite PEX tubing costs about one-third the price of copper. Plus, SharkBite PEX comes at a fixed cost, not at fluctuating daily prices like copper. The pipe’s flexibility also allows you to bend it around corners, which removes the need for 45- or 90-degree elbows in certain situations. That means fewer parts and more money saved.

Materials aren’t the only source of cost. Labor can be costly too. And when you’re spending time soldering copper, you’re losing time and money. The connections with a PEX system (especially with SharkBite push-to-connect fittings) are quicker to make.

PEX pipe is not only cheaper than copper but more durable too. PEX is immune to corrosion and mineral build-up, and it’s not affected by electrolysis, which can cause small pinhole leaks in copper piping. Copper pipes can last anywhere from six months to the life of a building. But PEX tubing, when operating within its pressure and temperature ratings, has a predicted life expectancy of 50 years per PPI TR-3.  Additionally, SharkBite PEX-b offers the highest-rated chlorine resistance and six-month UV resistance to combat risk of premature failure.

The Social Impact of PEX vs. Copper

Sustainability also considers the social and community impact of a process or product, such as safety, responsible labor sources, fair pay and more. PEX outperforms copper in health and safety, and it also does a better job of addressing the labor shortage. Here’s what you need to know:

A skilled trade labor shortage means there are fewer qualified people to help you finish the job. The SharkBite PEX system supports pros with limited help by making plumbing repairs and installations faster, safer and more reliable. SharkBite PEX is also made in the U.S. — right in Cullman, Alabama — which creates and maintains jobs that boost the national economy.

It’s not enough to work with plumbing materials that get the job done. Now more than ever it’s important to invest in products that are mindful of their impact on current and future generations. PEX has not only been a better alternative to metal piping for years but also checks more boxes than copper in all three pillars of sustainability.

Learn more about PEX and how to transition from copper to PEX easily with SharkBite fittings.

See how EvoPEX compares to other plumbing methods.
Image

SharkBite slip fittings require no tools, soldering or adhesives. Discover how to make an emergency repair on a water line.