How PEX Pipe Performs in the Winter 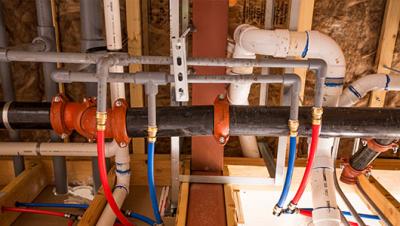 One the biggest winter challenges for homeowners is making sure their pipes don’t freeze and burst, causing a headache and unwanted damage during a particularly busy time of the year. But depending on the type of pipe in their house, an exceptionally cold day may not cause the same amount of concern. That’s because a flexible pipe is more likely to perform better in freezing conditions than a rigid one. So copper, PVC and CPVC are more at risk of bursting if water freezes in them than PEX is. We’re taking a look at how PEX performs in cold weather and how to reduce the amount of stress put on the plumbing system throughout the season.

Why PEX has an Advantage in the Winter

Its chemical structure allows for higher flexibility and pressure capabilities. And the plastic pipe’s strength doesn’t change in cold weather except in extreme temperatures. So when there’s more pressure, PEX expands, meaning it will survive a high-pressure situation, like water freezing, longer than rigid pipes.

All types of PEX — a, b and c — share nearly the same capabilities too. And SharkBite makes a PEX-b that not only holds up to freezing but is also one of the strongest PEX types on the market.

Just because it can tolerate the cold better than a rigid pipe, that doesn’t mean it won’t freeze or break.

So at what temperature will it freeze? It depends. While pipes themselves don’t freeze, the water inside of them does when the area around the plumbing reaches the freezing point. So even if the temperature outside is at 32 degrees, pipes underground, for instance, may not reach that same temperature unless it’s lower than 32 outside. Each case varies, but the Building Research Council at the University of Illinois defines the “temperature alert threshold” as 20 F for uninsulated pipes, particularly for Southern states that would experience sudden dips in temperatures throughout the winter.

PEX pipe will expand if frozen and contract to its original shape when thawed. But putting frequent stress on the system weakens it, increasing chances of failure and leaks. So, to preserve the strength of your pipes, you should use the same standard insulation precautions with PEX to keep it from freezing.

With 15 years of experience under her belt, Kim Yeagley, owner of Gold Canyon Plumbing, shares her path to becoming a plumber, the obstacles she's overcome and how a plumbing career allows her to find balance between work and play.

Anna Pearson, a plumbing apprentice in commercial new construction known affectionately online as the Plumbing Princess, shares how she jumpstarted her career in plumbing.
Image