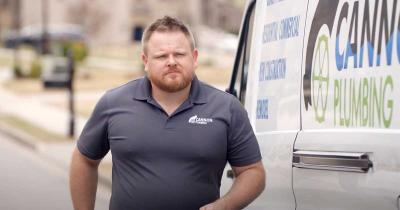 When Clint McCannon thinks about why he loves being a plumber, he first thinks of his family.

“I know guys that are making six figures, but they don't see their families. I have no desire to do that,” McCannon, who owns Cannon Plumbing in Braselton, Georgia, said. “Even without working 60, 70, 80 hours a week, I'm still able to make a great living, provide for my family, have a good life. We're able to go on vacations, enjoy time off.”

He also loves solving problems for people — arriving at their houses to find a leaky toilet or faulty kitchen sink and leaving with the issue fixed.

Initially, though, McCannon thought he was going to help people another way. He went to college to study psychology with the end goal of becoming a counselor. But after doing the math on the student debt he would incur and how many years he’d have to wait before he could start earning a living, he decided it would be better to leave college and start working.

He entered the plumbing trade — something he never thought he’d do — as an apprentice at a plumbing company in Atlanta that his friend worked for. He started off at $11 per hour in 2003.

“I was able to pay my bills, not get evicted, pay for a car,” he said.

Though he didn’t initially have a desire to start his own company, after a while, McCannon got tired of working for other people. So he decided to work for himself, and his plumbing career took off.

“I feel like I kind of jumped out of a plane without having my parachute on,” he said, “but it's been a lot of fun.”

The Power of Plumbing in a Crisis

It hasn’t been without its challenges though. When the COVID-19 pandemic hit in 2020, McCannon, like many others, was nervous about the unknown. But business didn’t slow down. Instead, it sped up, with 35% increases.

“Even when the economy is going down, people are still going to call you if their water heater goes out, if their toilet's clogged,” he said. “If it's something they can't handle on their own, they're going to call you.”

Watch: Plumbing pros share how they were handling times of uncertainty during a pandemic.

I've come to learn that plumbing is not just a job, it's not just a paycheck, lives depend on it.

His experience, especially through the pandemic, has shown him that plumbing is essential not only for his livelihood, but also for the health and comfort of others.

“I've come to learn that plumbing is not just a job, it's not just a paycheck, lives depend on it,” McCannon said. “It's a noble profession, and I'm proud to be a part of it.”

With 15 years of experience under her belt, Kim Yeagley, owner of Gold Canyon Plumbing, shares her path to becoming a plumber, the obstacles she's overcome and how a plumbing career allows her to find balance between work and play.

Anna Pearson, a plumbing apprentice in commercial new construction known affectionately online as the Plumbing Princess, shares how she jumpstarted her career in plumbing.
Image